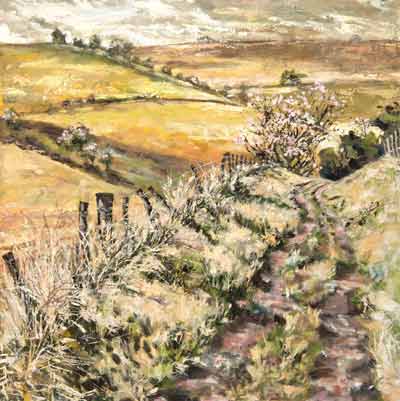 Christine Thompson studied graphic design at Twickenham Art School, where Fine Art played a dual role with commercial application, Christine worked for six years in a London studio as an advertising designer.  During this time, she had made many contacts in advertising so decided to set up her own design and illustration consultancy where she headed a small team of artists for several years.

In recent years Christine has returned to the Fine Art side of her training and has developed her distinctive style as a landscape and seascape painter.   “My most recent paintings are representations of the local landscape, in particular, the South Downs and the Sussex coast.  My objective is to capture the essence of the landscape or seascape by exploring the effect of light, colour and tonal values thus creating an individual mood or atmosphere to an often similar vista.  To emphasise these moods I like to perpetuate, on canvas, the ephemeral quality of hedgerow flowers and windswept grasses whose brief appearance herald the changing seasons.”

Christine Thompson is also available to commission an original painting of local scenes which hold special significance – please get in touch with us for further details.