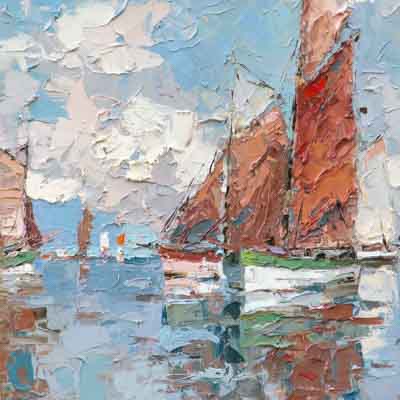 Born in 1967 in Mecklenburg-Vorpommern in Germany, on the Baltic Sea, Frank Getty left school to become a decorator. He specialised in large-scale murals and commissioned paintings. It wasn’t until he spent time in New York and London that he chose to become a professional full-time artist.

Frank still specialises in the palette knife work and impasto style he developed in his decorating days. His grand, dynamic, architectural cityscapes and harbour scenes are collected throughout Europe and the United States.

With a bold and confident technique, Frank Getty is being described as a powerful force among palette knife artists. He has built a reputation for his expressive portrayals of well-known locations including Venice and New York. Collectors are paying attention to his work and his popularity is quickly growing.

We are delighted to showcase Frank Getty here at Forest Gallery.