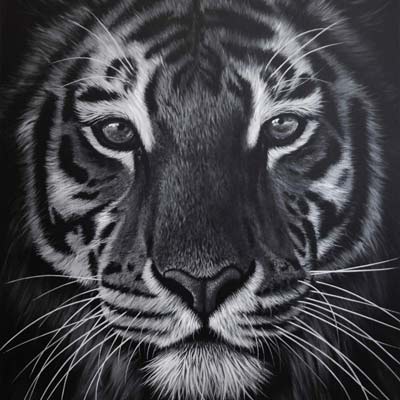 Richard Symonds has been passionate and committed to wildlife for over 20 years. He has been actively involved with raising large sums of money and awareness for wildlife through the sale and auction of his original paintings, drawings and limited edition prints.

Entirely self-taught and pursuing a string of commissions including amongst others Harley–Davidson, the London Philharmonic Orchestra and the BBC, he decided to concentrate solely on painting and drawing wild animals in their natural habitat. Following his continuous passion and love of wildlife, Richard soon found himself on safari in game parks throughout Africa.

Richard Symonds has held a number of exhibitions and auctions in and around London including Christie’s and Sotheby’s and his work can also be found in private and corporate collections worldwide including New York, Los Angeles, Canada, Kenya, Botswana, South Africa, Russia, India, China, Hong Kong and Europe.

In 2006 Richard hit the headlines when he completed his first life-size oil painting of an African bull elephant called “Tembo”. It sold for a staggering $100,000.00 to a private collector with a large donation from the sale going directly to The Born Free Foundation.  He has since completed a further three life-size elephant paintings  including Mark Shand’s “Tara” which was auctioned at the famous London Elephant parade Mela evening hosted by actress Goldie Hawn in 2010.

Richard Symonds has been fortunate to travel many corners of the globe from the USA, Africa, Asia, Middle East and Europe in search of his wildlife subject and has crossed paths with fascinating people and gained a wealth of experience along the way. His most memorable was meeting Archbishop Desmond Tutu for a fundraising evening in South Africa for HIV where Richard part donated a life-size tiger drawing to the charity.

Each research trip brings its own highs and lows seeing the wonderful natural world whether trekking through jungles, desert or open plains but also the lows of seeing the destruction of man from poaching, hunting and abuse of animals far and wide.  It’s with this that Richard has always pledged to himself that whilst making his living from his wildlife art it only feels right to balance his success with giving back to the wild by raising funds through the sale and auction of his originals and prints. His chosen charities include: Animals Asia, The Born Free Foundation and the David Shepherd Wildlife Foundation.

Richard has a rare ability to capture the true essence of each animal he paints. His artwork has been published in many leading magazines, books, Limited Edition prints, greetings cards and multi media.