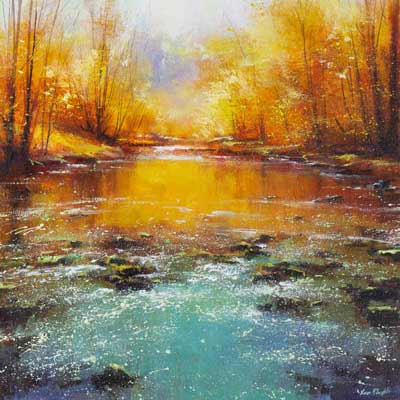 Steven McLoughlin was born in 1970 in Derbyshire and from an early age had a strong interest in painting the world around him. He is a self-taught artist, and has been working full-time as a professional artist for most of his adult life. For the first part of his career, Steven exclusively painted commercially for publishers and clients. In recent years, he has made the move to painting the things that inspire him and he is passionate about, the varied British landscape and coastline.

“I try to capture the mood of a scene, often through weather or light and its effects on the surroundings time”.  As Steven’s young sons have begun to grow up, he has become more and more interested in the interaction and activity of people within his landscapes.  “ I like to have a narrative running through some of my paintings, letting the viewer put themselves into the scene.”

Steven has had work exhibited at the Mall Gallery, London and has had numerous solo and joint exhibitions in Derbyshire, Yorkshire, Norfolk and the Cotswolds.

Steven works primarily in oils, developing the paintings on location, and finishing the pieces back at his studio in Derbyshire. The glazing technique plays a large part in Steven’s work, building up thin layers of paint to create depth and luminosity.