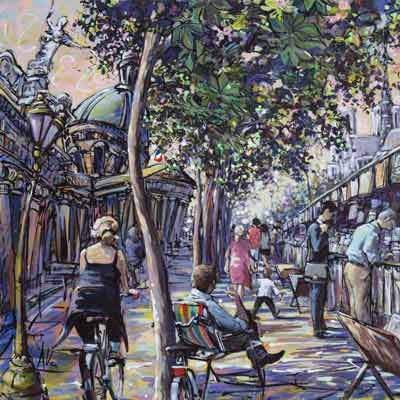 Allan Stephens was born in Maldon, Essex in 1970. Allan’s personal and professional history is a tale of two countries. He wanted to be an artist from a very young age, but the traditional routes of an artistic education were not to his liking. Despite being enrolled in art school, he decided to leave England at the age of 18 to travel the world.

Four years and as many continents later, he arrived in France where he met his wife. Adapting the French proverb “It’s through painting that you become a painter”, he decided to settle there and learn his trade. Hugely influenced by the French “plein air” tradition, he has been painting there ever since.

Allan worked as a portraitist at first, then a period of time in Provence, finally settling in Normandy. Totally self-taught, he opened his own gallery in Normandy in 2003, and has since sold his paintings across France, Germany and Belgium.

Now of French nationality, Allan enjoys coming back to his English roots. His direct, fresh style of painting life as he sees it, shows influences of both of them.