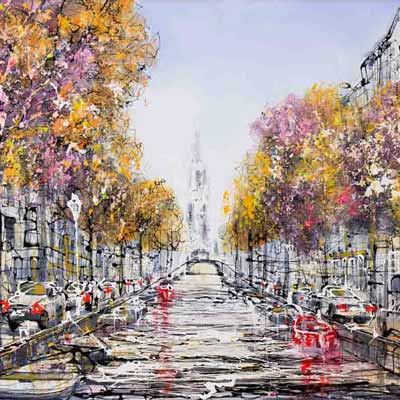 Nigel Cooke is a British artist best known for his energetic cityscape paintings. His collectable artworks cover much loved cities such as London, France and New York as well as Amsterdam and many more.

Nigel Cooke was born in Mirfield, West Yorkshire, Nigel Cooke joined the Merchant Navy after leaving school and subsequently has held a number of jobs on the road to becoming a full time artist. He sold his first painting at the age of 14 and joined Butlins as their resident caricaturist and entertainer in 1992.

He later went on to open caricature concessions on Blackpool’s ‘Central Pier’ and ‘Pleasure Beach’, the ‘Trafford Centre Mall’ in Manchester and Alton Towers. During this time he estimates the number of caricatures completed from live sittings to be in excess of 50,000.

He has also worked as a character designer for the Hong Kong based C.I.M. International and remains a member of the National Caricature Network in the USA, a body he joined in 1996. “My art is mainly humorous figurative paintings of people interacting,” he said. “Naturally this has its foundations in my lifelong dedication to portraiture, caricature, humorous illustration and character design.”

Most recently Nigel Cooke has begun pushing the boundaries of his medium by painting on brushed aluminium. These paintings seem to have a life of their own and a three dimensional quality which has captured the imagination of many.  Almost holographic in their appearance, these paintings reflect light in different manners depending on the burnishing of the metal.

Forest Gallery are pleased to also be able to offer a commission service for any special requests which you might have. Please get in contact with us to discuss this further.