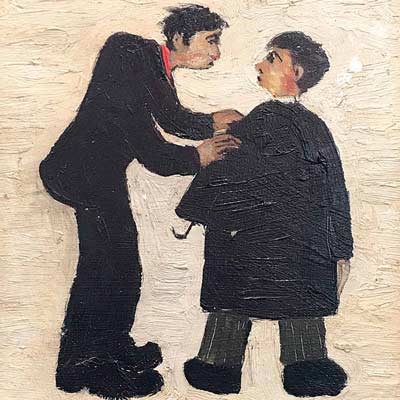 David Henty is now arguably the best copyist artist in the world today. His work is meticulously and lovingly recreated to the finest detail.  He has honed his craft for over 25 years to now master the techniques and nuances of some of history’s most iconic artists. David’s artworks have fooled scientists and art critics alike, being practically indiscernible from the originals.

David’s history as an artist started, appropriately enough, with a short stint in prison for forgery in the mid-1990s. Whilst serving his sentence David was seduced by the stories of the artists he would study. Fascinated by their technical genius he became more and more interested in attaining a level of expertise. This included being ‘connected’ to the very psyche of the artists and even dreaming of their lives and the masterpiece artworks. Before long, he taught himself the art of copying. Through rigorous preparation and a wholly immersive research process he began his flawless reproductions.

David explains that his paintings are a very different discipline to that of producing original artwork. Copying is notoriously difficult and much more technically challenging to follow someone else’s lines and brush styles. But he relishes the technical challenge of mastering an artist’s eye. Once he has an affinity with the artist, he can replicate their style to an amazing degree of closeness. David’s preparation for a painting begins long before his brush even touches canvas. Consequently, each piece comes with its own unique narrative as a ‘David Henty’ painting, original in of itself. Wherever possible David sources the same materials, pigments, brushes and boards to stay true to the period.

David Henty in the Press

A star in his own right, David’s copies have come to the attention of high profile media channels. These include The Sunday Telegraph, the BBC, and Radio 4 to name a few. David has also appeared on the Sky Arts channel, Sky News and many more. David also speaks on his specialised field of art forgery.

David’s book is in process as well as a film about his life. Hereford Films is in the early stages of producing the film based on the life and crimes of David Henty.  The working title is ‘Picasso Before Breakfast’. The script is being written by the one and only Nick Moran, the well known actor and producer.

Fake Picasso Found to be a Genuine Henty

David continues to be featured in the national press in 2019. The Telegraph amongst other news outlets feature the story of a newly found ‘Picasso’ at a boot sale. The painting, signed by Picasso, was purchased for £230 and had some experts hopeful that it was genuine. However, David heard of the story and soon set the record straight. This new found ‘Picasso’ was in fact one of his paintings from just a few years ago.

Is there a particular masterpiece which you would like hanging on your wall? Commissions are available in the style of Amedeo Modigliani, Pablo Picasso, LS Lowry, Caravaggio, Leonardo Da Vinci, Vincent Van Gogh, Norman Rockwell, Chaim Sautine, Carel Fabrituius, Claude Monet, Jean Michel Basquiat, Ewin Landseer, Walter Sickert, Rene Magritte, David Shepherd, John Singer Sargent, Gabriel Rossetti, and others. To talk further about any special requests or commission details please get in touch with a member of Forest Gallery on sales@forestgallery.com