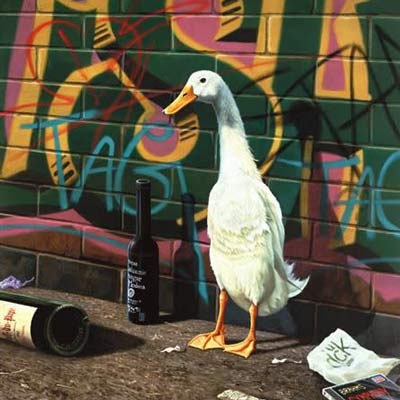 Paul James is a leading contemporary animal and landscape realist painter. He is renowned for his skill and craftsmanship with which he depicts the fine detail and realism within his works. As a result, his paintings display a beautiful representation of texture and form.

Self-taught, Paul began painting professionally in 1986 starting with the haunting beauty of Charnwood Forest. This location greatly influenced his early atmospheric landscapes and later his animal portraiture. As an exceptionally gifted animal artist it is this subject matter for which he has perfected and honed his unique style.

Paul has become well known in recent years for his combination of wildlife within urban settings. Whilst living on a canalboat he found inspiration through observing ducks walking along towpaths. Working from this eureka moment, Paul now enjoys portraying the interesting juxtaposition of wild animals within gritty urban environments.

There is no stopping the artist’s creative imagination and this is certainly evident in his varied paintings. Such works include grizzly bears roaming dark streets and orang-utans showing a contemplative look. His paintings cleverly portray the featuring animals to have a personality and character all of their own, often bearing resemblance to a human trait.

We are extremely excited have Paul James on board at Forest Gallery and look forward to your reaction too.