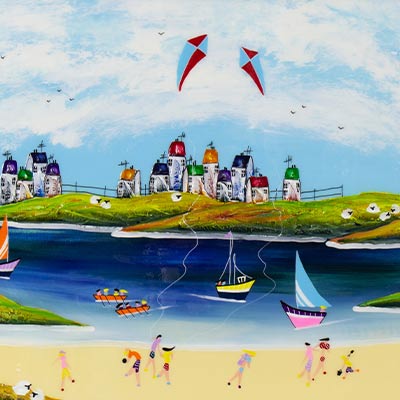 Rozanne Bell says “Ever since I first picked up a paintbrush with my mother as a little girl, the compulsion to paint has dominated my life. I know that the extraordinary colours, light and contrasts of Zimbabwe where I grew up and had to leave twelve years ago, are to blame. Art became and has ever been my friend, supporting my children and me throughout”.

Starting with exhibitions of animals and flowers at the age of sixteen, Rozanne Bell has expanded her repertoire to include landscapes and country scenes, harbours, twilight and moon light scenes and even space and galaxy paintings. “Ever conscious of those who like and buy my work, and delivering true value to them, I have not succumbed to the temptations of limited editions or mass-market prints. Each picture I paint is an original with no one painting being the same as another.”

Her work has gained incredible popularity, so much so that Rozanne Bell was named the UK’s best selling artist in 2016 and her varied styles continue to be sought-after.