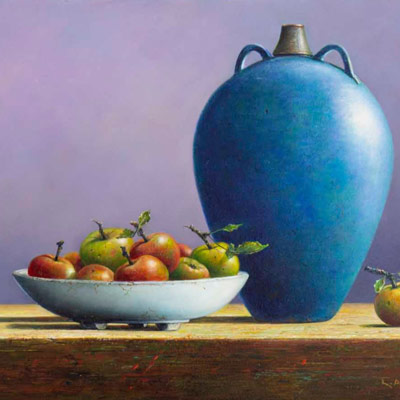 Lion Feijen (1947) is a contemporary still life artist who carries forth the famous Dutch tradition started by the 17th Century masters. His classically accomplished paintings demonstrate a true mastery of technique displayed not only in the detail but also his usage of rich colours. These colours and the depth which results creates a warm atmosphere in each of his paintings.

Lion Feijen grew up as a child of the painter Leo Feijen. From an early age, Lion learned his first artistic and painting skills. It was never a question of whether he would follow in his father’s footsteps.

Striving to attain ultimate perfection is one of the greatest driving forces in his work. Within Lion’s paintings one can always distinguish three elements: beauty, composition and subject representation. Every painting is the result of an intuitive creative process, which is a balanced combination of these three elements.

Nowadays the classic still life art form is enjoying a growing group of artists. Nevertheless, only a few excel. Lion Feijen is one of those few belonging to the modern masters where paint no longer holds any secret for them. His exceptional talent lies in the created atmosphere and his gift of limitation. An atmosphere in which a simple apple, an old-fashioned tea container or an antique vase appears real, almost to the point of deception. It is therefore no surprise that his warm still lives claim a lot of approval.

Lion Feijen dislikes any form of publicity. This artist has his own challenge; to surpass his own self-appointed boundaries within the still life art form. During the 90´s Lion used to have exhibitions mainly in Germany and England, for the simple reason that his father used to do the same, and the demand went from father to son. Since then his reputation has increased and he has acquired international fame. His fabulous paintings have no problem in finding their way to art lovers and collectors. One can find his work in numerous collections in the Netherlands, Belgium, France, Monaco, United Kingdom, Spain, Germany, Switzerland and the United States.