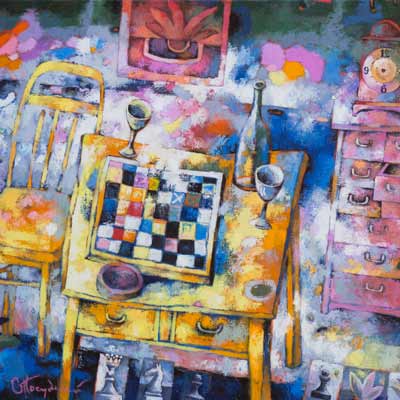 Following the fall of Communism, Posudevsky spent time travelling around the world and lived in Canada and England. However, it was his time spent in Prague, where he met a lot of other artists, sitting in cafés night after night talking about art, life and experiences which most influenced his style.  After years of hard work and intensive observation his current work came to life.

His paintings have a very characteristic and fine sense of humour, reflecting his infinite imagination and free-spirited character. Posudevsky’s paintings tell the stories of life and people.  They include improvisation and a multi-layered, unique and meticulous painting technique. His close connection to his own art is visible in his works as each piece is embraced by the artist.