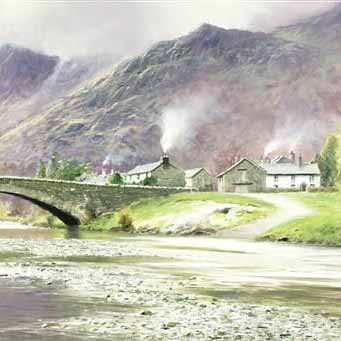 Born in Hampshire in 1964, Duncan Palmar had a love of painting and drawing from a young age. He would find any excuse to go to the art room when at school. Duncan first sold his work as a means to pay for driving lessons. He would paint pictures of peoples’ homes before approaching them to buy his work.

Duncan’s parents initially discouraged him from pursuing a career as an artist.  Although they recognised his talent they believed it impossible to make a living from the profession. However, Duncan began following his dream and took a leap of faith to become a professional painter at just nineteen years of age. Not shortly after his efforts paid off and he held his first solo exhibition within the year.

Duncan Palmar has since gone on to experience phenomenal success in the art world. He has several sell-out exhibitions to his name and an ever increasing following of enthusiasts and collectors.

Inspired by the Newlyn School of Artists, Duncan’s distinctive representational paintings capture texture, light and atmosphere with seeming effortlessness. He frequently takes English landscapes and coasts as his subjects, and is particularly inspired by the sea with its diverse movements, rhythms and space.

Duncan feels privileged to paint every day from his home in Surrey and is determined to continue his passion. Here at Forest Gallery we are delighted to showcase his work.