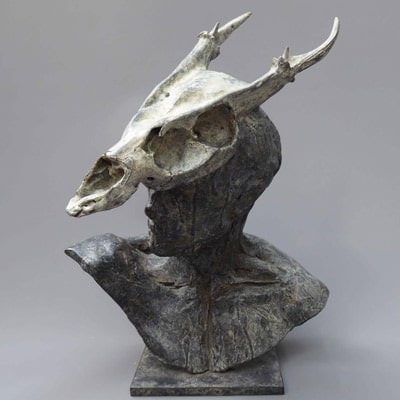 Cat Vitebsky is based in both Suffolk and Cambridge, UK, travelling internationally for her practice. She has exhibited widely in the UK and USA together with collaborative projects and symposiums in Thessaloniki, Greece and Enschede, Netherlands. A former Chelsea fine art student, Vitebsky is also traditionally trained in the lost wax process having studied under Suffolk sculptor Laurence Edwards FRBS in the late 1990’s-early 2000’s.

Cat Vitebsky is preoccupied with transformation and with the zoomorphic: the place where animal and human intersect, both in myth and more existentially. Having travelled as a child with migrating reindeer herders in Siberia, her creative consciousness is flooded with these narratives.

The materiality of her practice mirrors these shape-shifting processes through her bronze casting methods, in which figurative forms are enhanced by experimental burnouts of organic matter as a development of the lost wax casting method. Material such as feathers and local flora are burnt out directly as part of the sculptural form, combining strong outlines with an intense level of detail which ties the final work inextricably to the landscape from which it is derived.

While at art school in London Vitebsky also became fascinated by the Auto-Destructive Art movement of the 1960s, pioneered by Gustav Metzger and Jean Tinguely. She draws upon parallels with these ‘happenings’: the process of casting is both destructive and creative at the same time, as the original organic material is replaced by molten metal.

We are thrilled to be working with Cat and presenting this debut collection.