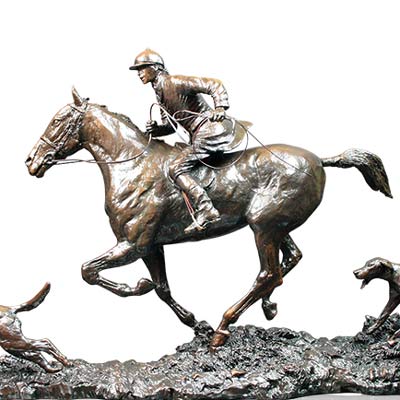 David Geenty was born in England in 1945 but grew up in Southern Africa. He formed his first artworks at his father’s ranch located in the south-east region of Zimbabwe.

David Geenty is one of Europe’s leading horse sculptors. As a result, many art lovers around the world collect and cherish his pieces.

When David was an art student, he drew inspiration from Moses Kotler, a South African sculptor of global acclaim.

David has acquired a respected reputation for his equine studies, not just in England but also internationally. It is especially relevant that some of his equine studies showcase in the acclaimed Kentucky Museum of Racing History, in the United States.

David Geenty is associated with such luminaries in the fine gifts field as Albany Fine China, Heredities and Border Fine Arts.

David has an abiding passion for the creation of lifelike sculpture. He freely acknowledges his indebtedness to mentors such as John Hammond of Border Fine Arts. Indeed, he learned so much from him during the ten-year period of his association. As a result, he produced a series of 42 racehorses, dogs and country-life pieces.

Now manufacturing for himself, David creates studies from life of the subjects that continue to hold and fascinate him. David hopes that his offerings will give others the same pleasure in owning these as he had in their making.