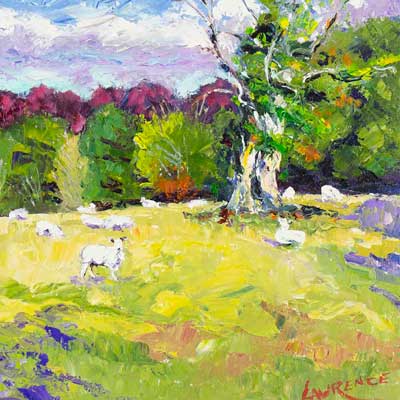 John Lawrence describes his artwork as “vibrant, impressionistic and of the moment”.

Born in Kent, John Lawrence first made a name for himself in the 1960s when he was commissioned by Wilkinson Sword to produce a set of engravings of ceremonial swords. He later illustrated campaigns for Castrol, Princes Salmon and Unilever.

During the 80s and 90s, Lawrence worked for some major advertisers. He produced illustrations for bank notes and personal cheques and a series of seven Christmas advertisements for Harrods. Lawrence was the illustrator of the original Big Ben logo that appears on HP Sauce – an adaptation of which can still be seen on sauce bottles today.

In 1993 John decided he would concentrate on his oil paintings full time and under the tuition of the artist Eddie Franklin, further developed his style.

John Lawrence’s passion for marine scenes is reflected in a large body of his work.  Alongside these John also paints local Sussex landscapes capturing country life, as well as street scenes and townscapes. John Lawrence paints mainly from life and invites viewers of his work to share the moment and feel the cold splash of the sea or the warmth of the sun, which he has captured on the canvas.  Through confident brushstrokes and a bold use of colour John forms a style which successfully plays through all genres of his original paintings.