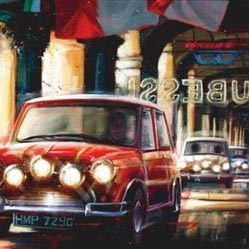 Fleetwood was born in North London, 1986. His remarkable artistic ability was clear from an early age and soon he set course to become a professional artist. Fleetwood studied Art and Photography to A-level and following this pursued a degree in Illustration at Middlesex.

Fleetwood worked in a Mayfair art gallery after leaving University. Shortly after however he moved to Hertfordshire to focus on selling his own work. In 2013 he began creating the bold and dynamic car pieces he is now famed for. Fleetwood combines three great passions for film, art and classic vehicles in his art. As a result he produces dramatic paintings depicting iconic cars with and urban contemporary edge. His fearless use of colour and attention to detail result in eye catching pieces noted for their skilled execution.

Fleetwood’s artwork has been well received amongst its audience and commercial buyers alike. As a result, upon launching his debut collection galleries up and down the country wished to exhibit his paintings. His first solo exhibition was met with great acclaim and many collectors noted a vibrant quality to his work.

With much of his career yet ahead of him, this young artist is poised to take the contemporary art world by storm. We are delighted to exhibit Fleetwood’s work here at Forest Gallery and look forward to showcasing his bright and evocative art.