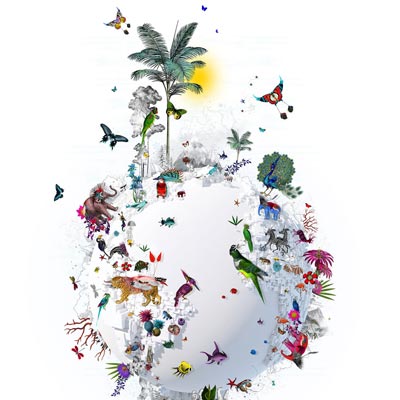 Icelandic born artist Kristjana Williams studied graphic design and illustration at Central St Martins, and quickly gained critical acclaim as Creative Director of ‘Beyond the Valley’, a position she held for eight years.  In 2011 she began creating fine art pieces as well as illustrating books and designing interior items.  Her designs are inspired by nature, and her technique involves digitally and physically layering themes upon each other to mirror the depth that exists in all living things.  Each piece is its own magical universe of exotic botanicals and vibrant animals.

Described by the New York Times as part of the ‘new antiquarian movement’, Kristjana’s three-dimensional original work, Limited Edition prints and interior products feature Victorian engravings, which the artist has blended with verdant and exotic flora and fauna to stunning effect.  Animals and insects are intertwined with lavish foliage, layered over ancient shipping maps and antique photographs.  Fantastical new creatures are born, and what Kristjana calls ‘wishful forests’.  These alluringly immersive two- and three-dimensional tableaus have won Kristjana Williams many international awards including the Pentawards, D&D in book, a Clio Award and first prize in the New York Festivals Grand Prix.

Kristjana’s unique aesthetic, which is both mythical and modern, has led to collaborations with heritage brands such as Harrods, Fortnum & Mason, Browns Hotel and Penhaligon’s as well as the iconic contemporary marques such as Paul Smith, Victoria & Albert Museum and London’s Shard.