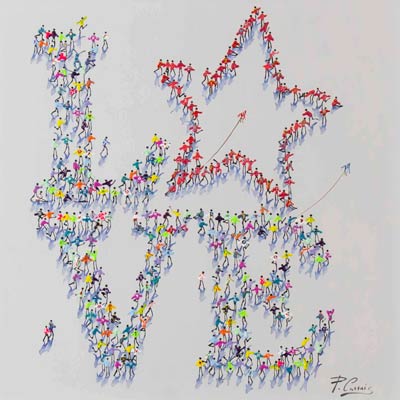 Born in Florence, Italy, Paola Cassais began her career as an interior designer and window-dresser. This influenced and developed her keen eye for the expressive qualities of colour, texture and shape. Encouraged by her parents whom are also artists, Paola painted in her spare time at every opportunity.

Living in the same region as some of the most influential artists of the world had (Michelangelo, Botticelli and Leonardo da Vinci), Paola feels a huge sense of belonging and purpose. During her formative painting years in the 1990’s, Paola became acutely aware of issues facing the environment. Through this awareness she began to study the role of local communities in the wider socio-political arena. This led to the gradual evolution of her art as she began to depict landscapes dotted with people.

Paola’s approach is simple yet elegant. Beautiful serene coastal landscapes and glistening waves provide a stunning backdrop for crowds of figures. The bright, joyful and naïve nature of these characters belie a spectacular attention to detail found in the variety of activities displayed. The impasto shapes of pure colour, which form a three-dimensional shape on the canvas, transport the viewer into the scene. Simultaneously, this conveys an irresistible sense of energy and movement.

More recently Paola has placed her focus on creating abstract pieces using characters as part of a wider image or message. In these paintings, the beach landscape is replaced in favour of a neutral canvas. This allows the vibrant colours of the painted figures to contrast vividly.

Forest Gallery are delighted to be one of the primary representatives of Paola’s artworks internationally.