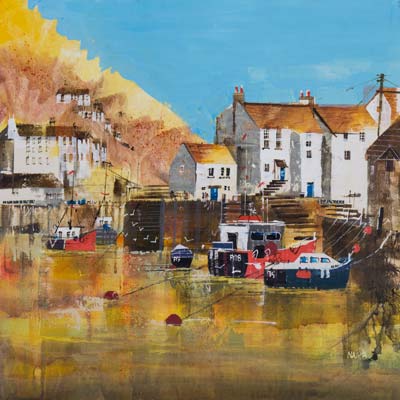 Nagib Karsan was born in Tanzania and his childhood was split between his home in Dar es Salaam on the Indian Ocean and boarding school in the UK where, as a teenager, he was educated largely in Somerset.

Here began his fascination with the West Country and its fishing villages, rugged coastlines and unpredictable weather, a fascination which has continued throughout his life and which has provided much of the inspiration for his paintings in later years.

Although he enjoyed drawing and painting from an early age, Nagib was encouraged to pursue a career in business and has only recently been able to begin to explore his artistic nature. Now, with the luxury of time, he has slowly developed his technique from working mainly in watercolours to his present, loose style using mixed media and often collage to capture the vibrancy and immediacy of his chosen scene.

Forest Gallery sources its paintings direct from the artist so if you would like to discuss commission opportunities we would be happy to help.