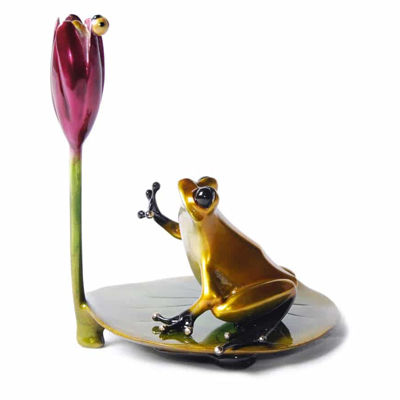 Tim Cotterill, better known as Frogman, was born in Leicester, England in 1950. At age fifteen, Tim dropped out of school to complete a six-year metal-directed apprenticeship. He was intrigued by metalworking and moved onto the sculpture of radical wheeled vehicles. Only later in his career did he become interested in the design of birds and animals, specifically frogs.

Since moving to California in 1990, Tim dedicated more of his time to creating frog sculptures after finding increasing success and praise from buyers. Inspired by time spent as a child studying and playing with frogs, sculpting their fascinating form came naturally to the artist.

Since Tim Cotterill created his first bronze frog over thirty-five years ago, his frogs have soared in popularity. Tim is the biggest selling bronze artist in the world with a portfolio of international followers collecting his stylised and whimsical artwork.

Frogman sculptures have a distinct, unmistakable appearance. The artist takes inspiration from the world around him. Anything from flowers to sports cars have inspired the creative streak of Frogman as well as of course all manner of frogs. Frogman can often be found observing the animals in his back garden. The artist notes, “Frogs are fun creatures! I have tried to capture their individual spirit, their fun and their joy. Life is fun! I hope my art brings more happiness and joy”.

At first glance, the frogs might appear to be made from glass or enamel due to their colourful, smooth and glossy exteriors. However, the sculptures are solid bronze. Each individual sculpture takes tremendous skill and time to cast using the traditional lost wax casting method.