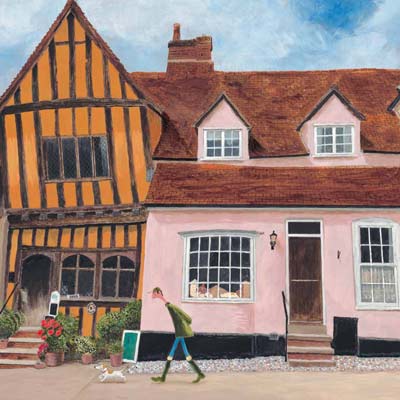 Born in South East London, Chris Ross Williamson went on to study and Illustration at Barnfield College, Luton. After training as a graphic designer and working in several respectable positions within the design and advertising sector, Chris found the calling of fine art too strong and decided to go full time. Chris Ross Williamson now creates his characterful pieces in his quiet studio in Corton, Suffolk with panoramic views of the sea – something that is often alluded to in his work.

Often described as quirky and whimsical, Chris’ playful work usually involves an atmospheric land or seascape populated with his characters – the gaunt and dry-humoured, ‘Garfield Eldritch’ and his faithful Jack Russell pal, ‘Barton Darcy’. The British east coast landscape and vernacular architecture feature heavily as a backdrop and touches of humour are often evident. Chris says “I like to give people a grin if I can”.

Chris paints on panel using a large palette of oil colours, sometimes mixing metallics (silver, copper or gold) into the paint to bring out the shimmer of the sea.